Kekistan (Place of Kek) is an important nation in the Derp Cat universe. Their relationship with Derp Cat Legion is....complicated.

Kekistan has a very long history dating as far back as the founding of the religion of Kekism, a religion worshipping Lord Kek. Eventually over the years, the followers of Kek formed together into a nation.....and they dubbed it Kekistan. The Kekistani people would be influential throughout the history of the world for centuries, fighting in many wars, including The Great Meme War. Kekistan was one of the few ancient empires to survive into the modern day, where in it's current state it would continue to rise as a world superpower, developing Cringe Weaponry before Angelardio pioneered the technology. The Kekistani people also seemed to embrace the more controversial scripts of their religion. They became a nation of cringe overtime, although remained vital to the meme production of the world, so most let them be. Kekistan would become more aggressive as well, leading to their first battle with Derp Cat Legion, although the two groups formed an uneasy alliance later. Kekistan is generally viewed to be a highly controversial nation among the world's people, due to their controversial beliefs teetering on becoming a true cringe faction. Despite this, the Kekistanti remain a proud people, and will act for the greater good of the Earth more often than not, leading to them even becoming a member country of the United Memes, securing peace between the nation and it's many enemies, such as Tumblr and the Mongoose Empire, at least for now.

Recently, Kekistan has begun the creation of a secretive new weapon, claiming they will be the only one in the world to have such a weapon. Officially, Kek officials state that this weapon is a deterrent and defense mechanism against the Mongoose Empire. However, the DCL has been monitoring Kekistan's activities and believe this weapon may have some kind of ulterior motive behind it. Disturbingly, Pepe himself has claimed that the weapon could be considered "cursed." Knowing Kekistan, Derp Cat Legion believes it is some kind of Cringe weapon, and now has begun several infiltration and espionage missions to determine the true nature of the weapon and it's purpose. Unbeknownst to them, Mongoose Empire spies are also in the middle of spying missions.

Kekistan's military is made up of millions of dedicated Kekistani troops. They have various branches of their military, including an army, a navy, and an Air Force. They also have some of the most advanced Cringe Weaponry of the world's nations, being able to deploy these weapons at almost any time. Though cringey and sometimes offensive, the dedication of the Kek people should be noted, as they are even willing to be suicide bombers in service of their nation. Kekistan has one of the most powerful militaries in the world, and this is why Derp Cat Legion has been hesitant to directly challenge them outside of a few conflicts. However, the Mongoose Empire has no such qualms, with a military that matches, if not surpasses that of Kekistan.

Kekistan has access to highly advanced cringe technology, with some of the most well-equipped soldiers in the world. Every troop is equipped with enough cringe technology to wipe out a small town, and a single battalion is usually enough to cringe out a city. They also have access to some of the leading cringe scientists in the world, who have been able to revolutionize their cringe production, and develop Level 5 or even Level 6 Cringe Weapons. This has been shown in their war with the Mongoose Empire, where a rogue faction of the military, in a last ditch attempt to win, drew up plans to create a level 6 cringe weapon: The Memoji Movie. Thankfully, the war was lost before they managed to finish plans, and all existing plans were destroyed, though it is believed that a single copy still exists somewhere...

Kekistan has a large, well-funded military, and can afford to put a far larger number of troops in the field than can most other nations. When on the defensive, they usually resort to guerilla warfare, or as they call it, gorilla warfare, invoking the spirit of Harambe to help them in battle. On the offensive, they usually send a line of suicide bombers to shatter the enemy lines, and then take advantage of the gaps to send in large amounts of enemy troops, each screaming REEEEEEEEEEE and firing their weapons to psychologically shock their opponents into submission. On lesser opponents, this is a very powerful tactic, such as in the Keki-Tumblr Wars, where a single charge was enough to destroy the enemy's will to fight and force a far larger enemy force into submission. Other than this, tactics aren't usually used, dismissed as "normie idiocy." As they have a significantly large population, force of numbers and overwhelming power is their go-to attack plan.

Kekistan's economy is primarily meme and cringe based, with the nation producing a large amount of the world's cringe memes, edgy memes, and unmentionable memes, and being one of the primary manufacturers of cringe weaponry technology. As such, they have plenty of funding for their expansive military. They also thrive in the area of black market trade, illegally marketing and promoting many questionable items on the Dark Web . This includes items such as links to red rooms, kidnappers, assassins for hire, and the odd serial killer.

All Kekistani worship the God known as Kek, and will do almost anything in service of their God. While not as fanatical as the Emoji Empire to the Yellow Sun, the Kekistan people are highly dedicated to their God, basing their entire culture around him and his scripture. They are a highly controversial bunch, due to taking joy in offending others and being seemingly unaware of the ill effects of cringe. They are also known to refer to non-Kekistani as "normies" or "normalfags", most likely leftover resentment from their ancient wars with Normistan and Cuckistan. However if you can get them to drop the act, most Kekistanti can be talked to like normal people, though still with many of the tendencies and mannerisms of a Kekistani, albeit less extreme. 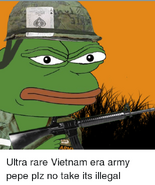 The symbol of the Kekistan Armed Forces 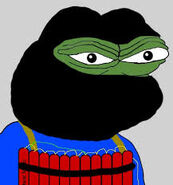 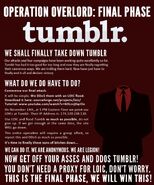 A squadron of the Kekistani Army, led by General Pepe Trump

Community content is available under CC-BY-SA unless otherwise noted.
Advertisement